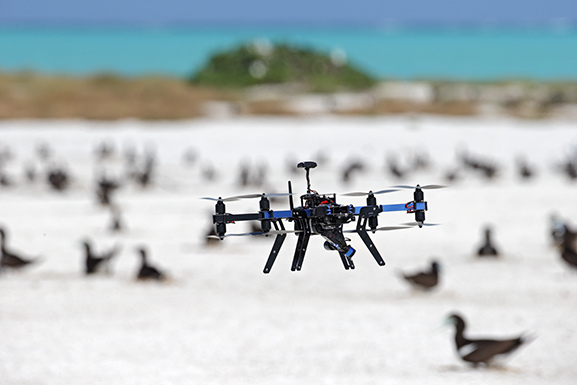 Research Ecology, led by Rohan Clarke, is partnering with ConservationDrones to use Unmanned Aerial Vehicles (UAVs or drones) for seabird monitoring. The Research Ecology team recently returned from a successful trip to remote islands in north-western Australia where high resolution images of nesting seabirds were captured using a UAV.

After some preliminary testing, we discovered that we could fly at an altitude of 75 m above ground level (agl) without causing disturbance to the birds in these environments. We also found that flying at lower altitudes would work for some large nesting species, but smaller non-nesting species were easily flushed from perching sites by the UAV at such heights.

We targeted colonies of Crested Tern and Lesser Frigatebird for aerial survey. The Crested Tern colonies represent a medium-sized species that nests in dense colonies on the ground, whereas Lesser Frigatebirds are a large seabird which nests in smaller groups typically on elevated nest stacks and within vegetation. For every successful survey, experienced seabird counters made 1 or 2 blind counts of the surveyed population. Research Ecology will be comparing these ‘ground counts’ with UAV aerial counts to assess the reliability of UAV data.

Research Ecology is continuing to refine techniques which will allow for lower impact and more reliable aerial surveying of vertebrates. We are excited to continue our collaboration with the ConservationDrones team in several upcoming projects.